Zaharoff Signature Pour Homme is an extraordinary fragrance palette of sweet lavender, clean blue cypress and spicy black pepper that unfolds into an earthy, smoky woods and floral heart of Oud and Balsam, finally settling into a trilogy of warm, spiritual and sensual Myrrh, Sandalwood and Frankincense.

From the shipyards of Odessa and Constantinople to knighthood in England and the Casino in Monaco, through time, the Zaharoff name has been an enigma of self-expression and bold values. Mariana Zaharoff, a talented designer for dignitaries and celebrities, began her career in the basement of her Chicago home in the late 1970s. She quickly was praised for her designs in London, Paris, Milan, and Athens; as well as receiving accolades in the U.S. (Weaving Art Into Fashion – Chicago Tribune), and was nominated twice for the Coty American Fashion Critics’ Awards. Forty-five of her designs are in the permanent collection at the Chicago History Museum. She was also chosen to be the designer of Patti Davis Reagan’s wedding gown. Following in her creative footsteps was her son, George Zaharoff. Beginning with his highly prized fragrance launched in the 1990s and impeccably tailored men’s suits in the 2000s, George Zaharoff developed a passionate and loyal following among consumers. In 2015, Zaharoff’s men’s clothing averaged annual retail sales of $3 million in 20 Nordstrom store locations. And in late 2018 re-entering the men's fragrance arena, with the launch of Zaharoff Signature Pour Homme. 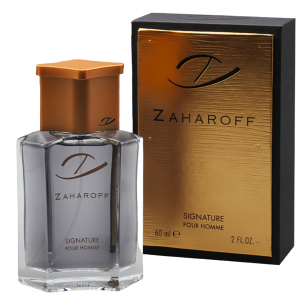